Most mass malicious mailing campaigns are very primitive and hardly diverse, with the content limited to several sentences offering the user to download archives that supposedly contain some urgent bills or unpaid fines. The email messages may contain no signatures or logos, with typos and other errors being fairly common. These mailings may target individual users or large corporations, with no significant differences in message content. 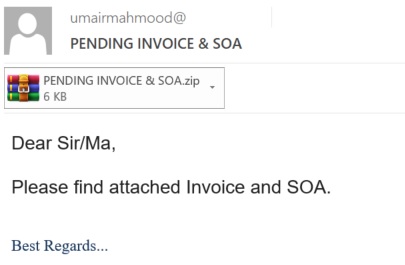 Things have started to change recently, though, as spammers began employing techniques that are typical of targeted attacks. In particular, they have been sending emails in the name of real companies, copying the senders’ writing style and signatures.

Customer email with an Easter egg inside

We discovered a noteworthy email message recently. In it, someone posing as a Malaysian prospect and using a fairly odd variety of English, asks the recipient to review some customer requirements and get back with the requested documents. The general format complies with the corporate correspondence standards: there is a logo that belongs to a real company and a signature that features sender details. Overall, the request looks legit, while the linguistic errors easily can be attributed to the sender being a non-native speaker.

The email from the “Malaysian prospect,” with a malicious attachment

The only thing about the email that smells fishy is the sender’s address (newsletter@trade***.com), as “newsletter” is typically used for news, not procurement. Besides, the sender’s domain name is different from the company name in the logo.

In another email, a purported Bulgarian customer inquires about the availability of some products and offers to discuss the details of a deal. The requested products list is said to be in the attachment, as in the previous specimen. The sender’s address, similarly suspicious, belongs to a Greek, not Bulgarian, domain, which apparently has no relation to the company whose name is used by the spammers. 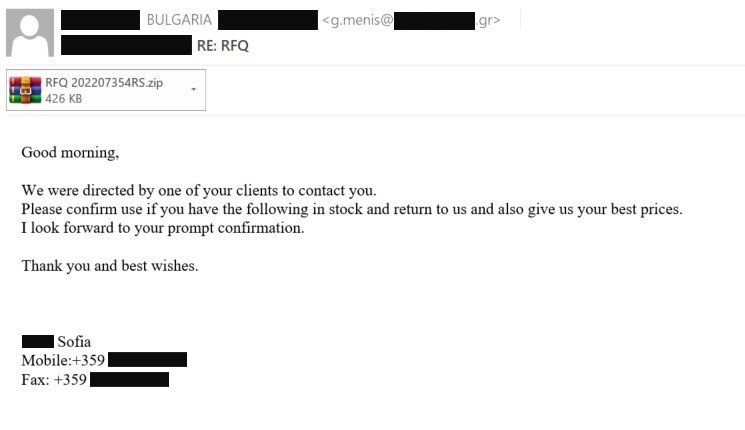 The email from the “Bulgarian customer,” with a malicious attachment

What these two messages have in common is both the mailing scenario and the fact that neither looks generated by a machine. Looking closely at the message headers, we noticed that they shared a structure: a sequence of headers, MSGID format and email client were the same. Besides, the messages originated within a limited range of IP addresses. This suggested that they were part of one massive email campaign.

Unlike the IP addresses and headers, the content varies. The spammers have been sending malicious archives addressed from a large number of companies, with the “request” text changing as well. This suggests that the operators invested quite some effort into preparations, which is uncharacteristic of this kind of campaigns.

We studied the contents of the archives attached to the emails, finding it to contain one of two unique files that belong to the same family. It is the widespread Agent Tesla malware, written in .NET and known since 2014. Its main objective is to fetch passwords stored in browsers and other applications, and forward these to the operator. While Agent Tesla most frequently forwards data via email, there are versions that drop the stolen data into a Telegram secret chat, on a website operated by the attackers or on an FTP server. The Agent Tesla version being spread by the campaign at hand is one the latest, capable of ripping password from the following applications.

Agent Tesla targets users around the world. According to our observations, the malware’s activity from May till August 2022 was the highest in Europe, Asia and Latin America. The largest number of victims (20,941) was recorded in Mexico. It was followed by Spain, with 18,090 users’ devices registering infection attempts, and Germany, where 14,880 users were affected.

The spam campaign we discovered is clear proof that cybercriminals can invest significant effort even in mass attacks. The email messages we studied appear to be high-quality imitations of business inquiries by real companies, only given away by the inappropriate sender addresses. In all likelihood, these emails were composed and sent out manually. That said, our systems were detecting more than a hundred thousand of these emails each month, which targeted organizations all around the world.

The payload spread by the attackers is capable of stealing login data from an imposing number of applications. The data may be offered for sale on darkweb forums or used in targeted attacks against organizations. Agent Tesla is notably a long-known stealer, detected by most cybersecurity products. It is assigned the verdict Trojan-PSW.MSIL.Agensla by Kaspersky products.

MD5 hashes of the executables and details of attackers’ email accounts used for sending and receiving data stolen by the sample: